Fort Street Union Depot NW5 switcher #2, at the Florida Railroad Museum in Parrish, Florida. Number 2 is one of only 13 NW5 switchers built by EMD (Most of the rest ended up on the Great Northern). Along with sister #1, it spent 12 years as the depot switcher for Fort Street Union Depot in Detroit, switching Wabash, PM and C&O passenger trains in and out of the terminal. During this time, both wore the PM's blue and Venetian Yellow paint in a scheme unique to the NW5s. They were serviced by the PM as part of its obligations as a tenant of Fort Street Union Depot.

SW1 switcher #11, at B&O Museum (901 W. Pratt Street), operable. This locomotive, restored to its "as-delivered" black and Venetian Yellow paint scheme, is used on short trips through the museum grounds.

Modifications made to this locomotive since its PM days include a twin sealed-beam headlight and full-length handrails down its sides necessitated by its years of service in the Sarnia, Ontario area.

Number 11 was one of the pieces of equipment damaged in the February 17, 2003 roof collapse at the B&O Museum. Upon removing it from the pile of debris, it was discovered to have suffered only broken glass, dents and scratches. Its damage was nowhere near comparable to the total destruction of several other older pieces in the roundhouse at the time. As a result, #11 was among the first pieces restored, in early 2004. While restoring it, the Museum staff returned #11 to near-original condition, with a single-beam headlight and its original handrail configuration. Prior to the roundhouse collapse, #11 carried the twin sealed-beam headlight and handrails along the full length of its carbody, shown above, that the C&O added to it in later years.

The PMHS contributed to the restoration of #11 by providing original lettering diagrams and paint specifications. The Society also has donated copies of its Pere Marquette Passenger Car Pictorial to the Museum Gift Shop, with all proceeds from their sale to be applied toward repaying the cost of the switcher's return to service.

This locomotive was displayed for many years at the Michigan State Fairgrounds in Detroit, MI, during which time many components were removed for use in the effort to restore sister Berkshire #1225. In the early 1980s, the City of Grand Haven acquired it for display. Much hard work on the part of Pere Marquette 1223 Preservation Committee volunteers has paid off, resulting in a thorough cosmetic restoration.

In December, 2000, #1223 was placed on the National Register of Historic Places.

Click either here or on the photograph to see a larger version of the photo and more information about this locomotive.

M&NE NW2 #3, formerly owned by the Leelanau Scenic Railroad. It is the last surviving locomotive from the Manistee & North Eastern.

With the closing of the Leelanau Scenic Railroad in 1994, this locomotive was sold, dismantled and moved from Greilicksville, along with the similarly-painted SW9, ex-C&O #5258, painted as LSRR #4. The new owner, an individual loosely affiliated with RailAmerica, planned to reassemble the locomotives in Traverse City, then have them moved to Saginaw, where he was to take possession of them and move them elsewhere (Vassar?) for rebuilding. This plan stalled when the crane brought onto the site during the early Summer of 1999 was unable to move the frame or trucks. All of the parts of #3 were moved to Traverse City by November, 1999; Number 4 followed in early 2000. Photos of the dismantling and moving processes can be seen on Jack Hengartner's Web site.

Number 3 sat in pieces for several years in Traverse City after being removed from the Leelanau Scenic Railroad. While at Traverse City, it was vandalized repeatedly. During the first week of January, 2005, #3 was moved by truck to Kaleva, where it has been cosmetically restored and placed on display at the Kaleva depot. 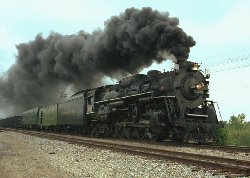 N-1 Berkshire #1225, at the Michigan State Trust for Railway Preservation facility in the former Ann Arbor Railroad Owosso yard. Restored over a period of 20 years, #1225 is the last operable PM steam locomotive, #1223 in Grand Haven and many of the other preserved Berkshires in the Midwest having provided parts for its restoration.

#1225 has been used by the MSTRP on excursions up the former NYC St. Charles branch under the auspices of the Shiawassee Valley Railroad in the early 1990s, as the centerpiece of their "Engineer for an Hour" program, and on mainline excursions in West Virginia as part of the 1991 NRHS National Convention in Huntington, WV. She has been an occasional visitor to the Durand Railroad Days festival.

After years of crumbling, the brick backshop which had housed #1225 since the early 1980s was demolished in Fall, 2000. A new home for #1225, a few hundred feet west, has been constructed as part of a new site including a new multi-stall storage building and restoration facility and featuring the turntable formerly located at the ex-PM roundhouse in New Buffalo. Information on the MSTRP's Steam Railroading Institute can be found on the MSTRP's web site.

1225 is shown at Erie, MI en route to her 1991 appearance at the NRHS National Convention in Huntington, WV.

The D.B. Harrington was built in 1878 for PM predecessor Port Huron & Northwestern by Porter, Bell & Co. It served the PH&NW for only a few years, and was sold by 1884 after its limited speed and pulling capacity proved to be insufficient for the railroad's needs. It bounced around among various logging companies in northern Michigan until 1923, when it was retired from its last job, serving as a stationary boiler for a cherry cannery in Glen Haven. Displayed at the cherry company's offices until the early 1930s, it was placed on loan to the City of Traverse City, which put it on display in Clinch Park. The D.B. Harrington remained on display until 1965, at which time it was acquired by the Cedar Point amusement park in Sandusky, Ohio. Its boiler deemed no longer even repairable, the engine was put on display until about 1974, when park expansion overran its display site and it was moved into storage.

After a brief period under ownership by the Henry Ford Museum, during which time its tender was deemed too far gone for restoration and replaced with a replica, the Museum decided that the locomotive no longer fit its needs, and in 1991 it was transferred to the Port Huron Museum. In early 2018, plans were put into motion to have the D.B. Harrington cosmetically restored at St. Clair County Community College.

The photo here shows it as it looked while stored at Cedar Point.

Thanks to T.J. Gaffney for providing the history of this locomotive. A complete history of the D.B. Harrington is available on the Lakeshore Guardian's web site

Use of this Web site and the materials contained within it subject to specific terms and conditions.

Do you have questions or comments regarding this Web site? E-mail to